The Charlotte Concert Band is focused on community.  Members of our community sharing the joy of music with fellow community members. One way we fulfill our mission of offering lifetime participation in music is by starting them young and extending performance opportunities to our community’s school-age performers

musician for a lifetime program ​​Middle schoolers have opportunities to experience performing with the Charlotte Concert Band as part of our biennial Musician for a Lifetime program. During years that the we do not host the Youth Concerto Competition, we invite talented middle school musicians from North Carolina’s South Central District All District Symphonic Band to join us on stage at the Sarah Belk Gambrel Center for the Performing Arts and Civic Engagement at Queens University for our fourth and final concert of the season.
​ 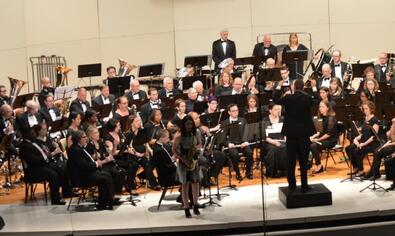 ​Young musicians in grades 9 through 12 who are interested in concert performance can participate in the biennial Charlotte Concert Band Youth Concerto Competition. Students can audition to be a featured soloist in the Charlotte band’s spring concert. Along with performing privileges comes a music scholarship from the Charlotte Concert Band. The competition is open to pianists, percussionists and wind players who reside or study in one of the following Charlotte-metro area counties: Cabarrus, Cleveland, Gaston, Iredell, Lancaster, Lincoln, Mecklenburg, Stanly, Union and York.
THANK YOU TO OUR SPONSORS AND SUPPORTERS
We are grateful for our sponsors and supporters who are committed to advancing the performing arts in the Charlotte region.
​More information on corporate sponsorship programs are available here.